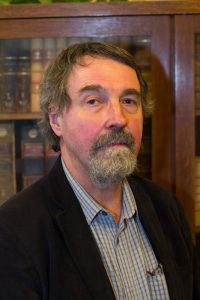 Professor of English, American and Comparative Literature, Head of the English Literature Section and Chair of the Board of the Ph.D. programme Anglophone Literatures and Cultures. He is the author of Romantismus a osobnost (Romanticism and Personality, 1996), a critical study of English romantic aesthetics, Coleridge and Byron, Transversals (2007), an interpretation of Romanticism as the first pluralistic project of modern culture and Ruins in the New World (2012) a theoretical study of the functions of ruins in American history and culture. He is the co-author (with Zdeněk Hrbata) of Romantismus a romantismy (Romanticism and Romanticisms, 2005), a comparative study on the chief discourses in the West European, American and Czech Romanticism. With Zdeněk Stříbrný he edited Slovník spisovatelů: Anglie… (An Encyclopaedia of Writers: England, Africa, Australia, India, Ireland, Canada, the Caribbean, New Zealand, Scotland, Wales, 1996, 2003). With Michael Dobson, Andreas Höfele and Hana Scolnicov he edited Renaissance Shakespeare: Shakespeare Renaissances (Rowman and Littlefield, 2014) an anthology of essays based on the best papers from the Ninth World Shakespeare Congress (Prague 2011), of which he was the Local Organizer. He has published two textbooks: Literary Theory (1995, 1997, 2008, 2015) and Lectures on American Literature (2002, 2008, 2015), the latter jointly with Hana Ulmanová, Justin Quinn and Erik Roraback. His other publications include a number of edited volumes, book chapters and articles on Shakespeare, Romanticism, Structuralism and Poststructuralism, and translations of Byron’s Manfred and M.H. Abrams’s The Mirror and the Lamp into Czech (1991, 2001). He is the founding editor of the international academic journal Litteraria Pragensia. Studies in Literature and Culture and editorial board member of five other international academic journals. He was the Benjamin Meeker Visiting Professor at the University of Bristol, Visiting Professor at Bowling Green State University (Ohio) and at the Universities of Glasgow and Kent, Visiting Lecturer at the University of Heidelberg (Germany), Distinguished Visiting Scholar at the University of Adelaide and Visiting Scholar at the University of California at Berkeley. He is the Visiting Professor at the University of Porto and the Honorary Professor at the University of Kent. He was a member of the Steering Committee of the European Network project ACUME2 “Interfacing Sciences and Humanities” and is the General Coordinator of the H2020, MSCA ITN European Joint Doctorate (EJD) Project MOVES “Migration and Modernity: Historical and Cultural Challenges.” He is a member of the Advisory Board of the International Association of Byron Societies (IABS) and of the Committee of the International Association for the Study of Scottish Literatures (IASSL). His current research areas include Shakespeare in intercultural communication, Preromanticism and the picturesque, British Romanticism and its Czech reception, American colonial literature and literature of the early Republic (Thomas Jefferson, Charles Brockden Brown), American Romanticism (Poe, Hawthorne, Melville), Cultural History of Ruins and Ghost Towns in the U.S., Structuralism and post-structuralist theories and the problems of pragmatism, performativity and fiction in literature and philosophy.

Martin Procházka welcomes thesis proposals in the following areas:
BA: British and American Romanticism, American Colonial Literature and Literature of the Early Republic
MA: Cultural History of the American West, reception of Shakespeare and Romantic writers in Czech culture, and the areas listed under BA.
PhD: American and British critical theory (after the New Criticism), Shakespeare in intercultural communication, Preromanticism and the picturesque, and all the areas listed under BA and MA.