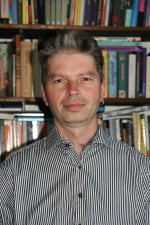 Professor of English and American Literatures and Director of the Centre for Irish Studies. Chair of the Graduate Studies Board (oborová rada) for Anglophone Literatures and Cultures.

Ondřej Pilný is the author of The Grotesque in Contemporary Anglophone Drama (Palgrave Macmillan, 2016), Irony and Identity in Modern Irish Drama (Litteraria Pragensia, 2006) and editor of J.M. Synge, Hrdina západu: Dramata a próza (an annotated edition of Synge’s work in Czech translation, 2006), Cultural Convergence: The Dublin Gate Theatre, 1928-1960 (with Ruud van den Beuken and Ian R. Walsh, 2021), Ireland and the Czech Lands: Contacts and Comparisons in History and Culture (with Gerald Power, 2014), ’Tis to Create and in Creating Live. Essays in Honour of Martin Procházka (with Mirka Horová, 2013), Prague English Studies and the Transformation of Philologies (with Martin Procházka, 2012), Global Ireland: Irish Literatures in the New Millennium (with Clare Wallace, 2006), Time Refigured: Myths, Foundation Texts and Imagined Communities (with Martin Procházka, 2005), Petr Škrabánek, A Night Joyce of a Thousand Tiers (with Louis Armand, 2002), and of six thematic journal issues, Dialogue, Performance and the Body Politic (with Clare Wallace, 2022), Irish Theatre and Central Europe (2015), Theatre and Politics: Theatre As Cultural Intervention (with Clare Wallace, 2014), Neglected Irish Fiction (with Neil Murphy and Keith Hopper, 2012), Samuel Beckett: Textual Genesis and Reception (with Louis Armand, 2007) and From Brooke to Black Pastoral: Six Studies in Irish Literature and Culture (2001). His work on Irish literature, theatre, and culture has appeared in essay collections and academic journals across Europe, in the U.S., Brazil, and Japan. His published and/or staged translations include plays by J.M. Synge, Brian Friel, Martin McDonagh, Enda Walsh and Mark O’Rowe, and Flann O’Brien’s novel The Third Policeman. He is co-editor of the international academic journal Litteraria Pragensia. Studies in Literature and Culture.

Ondřej Pilný is a past Chairperson of the International Association for the Study of Irish Literatures (IASIL, 2016-2022) and its bibliographer for the Czech Republic, former Vice-President of the European Federation of Associations and Centres of Irish Studies (EFACIS, 2013-2019), former member of the Executive Committee of the Irish Society for Theatre Research (ISTR, 2011-2019), committee member of the Irish Forum – Florence 2005 and co-editor of its Report (2006), member of the Czech Association for the Study of English (CZASE), and the German Society for the Study of Contemporary Drama in English (CDE). He was a visiting researcher at National University of Ireland, Galway (2012) and University of Oxford (2014), and a Visiting Professor at the University of Vienna (2017-18).

Deadline for Thesis Writers
If I am supervising your BA or MA Thesis and you wish to have it examined in autumn, please be advised that I must receive the complete text no later than 5 July. This must be preceded by regular submission of draft versions according to a schedule established on assignment of the thesis topic.