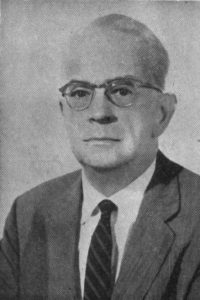 Eminent comparative literary critic and theorist, professor at the University of Iowa and professor emeritus at Yale University

René Wellek was born and raised in Vienna, his father was the Czech translator and biographer Bedřich Smetana. After 1920, he studied at the Faculty of Arts, Charles University: German philology with Otokar Fischer and English philology with Vilém Mathesius. In 1926, he was awarded a doctorate based on his dissertation on the Victorian Scottish philosopher Thomas Carlyle and his influence on German Romanticism. His first monograph, Immanuel Kant in England (1931), was written during his research stay at Princeton University. In 1932, he defended it as his habilitation.

In 1933-34, he worked as deputy head of the English seminar and lectured on Victorian literature, among other topics. Based on Mathesius’s lectures, he compiled the textbook Dějiny anglické literatury (History of English Literature, 1933), covering the period from the late Middle Ages up to the eighteenth century. In September 1934, he joined the Prague Linguistic Circle, lectured on the concepts of literary history, and worked on theory of translation, theory of verse, and history of literary theory in Britain.

In 1935, he became a lecturer in Czech at the School of Slavonic Studies at London University, where he also lectured on Czech literature. His research during this period found expression in two later monographs: The Rise of English Literary History (1941) and Essays on Czech Literature (1963). In London, he befriended Jan Masaryk.

After unsuccessful attempts to gain a professorship in English and comparative literature at the Faculty of Arts, he left Czechoslovakia in 1939, first for London and later for the USA, where he obtained a post at the University of Iowa. There, he wrote the internationally acclaimed Theory of Literature (1949) together with Austin Warren. The treatise is based on Prague and Polish structuralism and shows the influence of Roman Ingarden. In 1946, Wellek became professor at Yale University, where he built a department of comparative literature and published his most important work, the monumental eight-volume study A History of Modern Criticism 1750-1950, where he also positively evaluates the contribution of the Prague Linguistic Circle. Despite the adverse political situation, Wellek maintained contacts with Prague English studies, through Zdeněk Vančura and Zdeněk Stříbrný, until the end of his life. In 1995, he received the Order of Jan Masaryk.