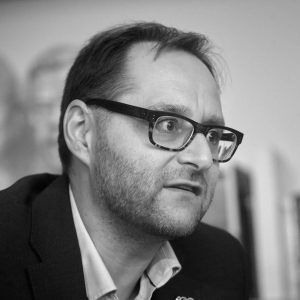 Richard Olehla is a university lecturer, literary journalist and translator. He graduated from the English Department, Charles University in Prague in 2001 and holds a PhD. in American literature (2011), specializing in post-9/11 American fiction. He has taught a variety of courses in modern American literature and culture at Charles University, the Josef Skvorecky Literary Academy, and the Akcent College. He has been a recipient of the Camoes scholarship (2000) and the J. W. Fulbright scholarship (2005). His professional interest focuses on post 9/11 literature and the relationship between ideology and writing. In 2014, his monograph Perspektivy konce: Thomas Pynchon a americký román po 11. září was published by Karolinum.

Richard Olehla currently works at Anglo-American University in Prague, where he is in charge of academic quality. Apart from that, he also contributes to Czech literary journals and leads an e-book publishing project at the Municipal Library in Prague.