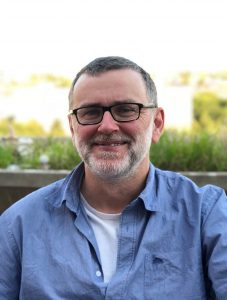 Justin Quinn was born in Dublin, and educated there at Trinity College (BA & PhD). With David Wheatley, he was a founding editor of the Irish poetry magazine, Metre. His translations of the Czech poet Petr Borkovec, From the Interior, appeared in 2008 from Seren. He also lectures at the Department of English, Faculty of Education, University of West Bohemia. In 2017 his translations of Bohuslav Reynek, The Well at Morning: Selected Poems, 1925-1971, were published by Karolinum, with essays by Martin C. Putna and Jiří Šerých (read a sample). His translations of Jan Zábrana’s poetry, The Lesser Histories, were published in 2022 by Karolinum/University of Chicago Press. Some of these have been published in BODY, the Fortnightly Review, Modern Poetry in Translation, LitHub, and the New York Review of Books; an excerpt from the afterword appeared in the Los Angeles Review of Books.

With Gabriela Klečková, he edited Anglophone Literature in Second-Language Teacher Education: Curriculum Innovation through Intercultural Communication (Routledge, 2021). It is based on the new program at the English Dept of the Faculty of Education at the University of West Bohemia.

He has published seven collections of poetry; Tomáš Fürstenzeller translated his work into Czech (Vlny a stromy; Opus, 2009). A novel, Mount Merrion (Penguin), was published in 2013; it was translated by his wife, Tereza Límanová, into Czech and published by Argo in 2015. He has written essays occasionally for the Dublin Review (Landscape and Memory in the Sudetens, The Cabinet: A House in Prague). He gave a talk at TEDx Plzeň about translating – and being translated by – poetry.

He contributed translations to the forthcoming End of the World: Poetry and Prose, by Ivan M. Jirous (Karolinum/U of Chicago Press). His last book of poems, Shallow Seas, was published by Gallery Press in 2020. In this video, he reads, Child of Prague, a poem from the book. He wrote an essay, A Blaze to the Bear, about a walk from Černošice to Beroun, in honor of David Wheatley’s fiftieth birthday; it was published online in August 2020.

An essay, entitled Ghosts and Neighbours, about the seventeen-minute walk from his apartment to the Metro, appeared in the Summer 2022 issue of the Dublin Review.

His past-times include taichi, learning Irish, and walking. He is married to the writer and artist Tereza Límanová.

Yeats and the End of the World. International Yeats Studies 4.1 (2020). PDF available thru link.

Paul Muldoon and the Irish Language. Litteraria Pragensia 28.55 (Jul 2018): 30-42. (PDF) [For those interested in the whole issue about the global contexts of literature in Gaelic and Gallic, see this link.]

“Out in the Open: The Pocket Book of Edward Thomas.” In: Dusk and Dawn: Literature Between Two Centuries, eds Šárka Grauová and Eva Voldřichová Beránková. Faculty of Arts Charles University Press, 2017.333-355. pdf

Stevens Across the Iron Curtain. In: Poetry and Poetics After Wallace Stevens. Ed. Bart Eeckhout and Lisa Goldfarb. Bloomsbury, 2016. 89-102.

Please submit essays in electronic format only via email. No essays will be marked between 1 July and 15 August. Also, during the summer, expect delays of 1-2 wks for answers to email.

Thesis writers at all levels should consult a style manual. I recommend either The Elements of Style, by William Strunk Jr and E. B. White, or The Sense of Style: The Thinking Person’s Guide to Writing in the Twentieth-First Century, by Steven Pinker. While the first is sometimes too prescriptive and idiosyncratic, it is brief. The second is longer, but more thorough, more exact and more up-to-date.

If I am supervising your BA or MA Thesis and you wish to have it examined in autumn, you must submit the complete text to me no later than June 15.  Also, you must submit a first chapter, with full scholarly apparatus, by 15 March, in order to  ensure that formatting and style are correct. I expect that you will provide chapters individually from March to June. The timetable for defence of theses in the winter exam period should follow roughly the same schedule.

Communicating with the instructor

You can address me either as “Dr. Quinn” or “Justin,” whichever you are more comfortable with; if we are speaking Czech, we should use Vy, unless otherwise agreed. By default, I will address you by your first name, but if you are uncomfortable with this please let me know. Communication by email should be formal and professional, closer to a letter than social-media posting/messaging. My pronouns are: he/his/him.