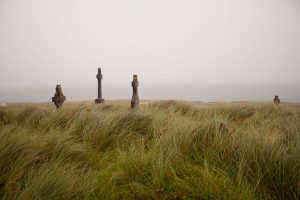 The Centre for Irish Studies is pleased to invite you to a guest lecture by Dr Seán Hewitt “Mysticism, the Occult, and Synge’s The Aran Islands”.

Although Synge, unlike contemporaries such as Yeats and AE, has not been seen as an occult or mystical thinker, archival materials show that he read widely in occult literature, covering theosophy, magic, telepathy, and other pseudosciences. Focusing on his major prose work, The Aran Islands (1907), this lecture places Synge’s socialism and reaction to modernity back into the context of fin de siècle occultism, and in doing so reveals the roots of his synthesis of mystic and political thought.

Seán Hewitt is an award-winning author, a lecturer in Modern British and Irish Literature at Trinity College Dublin, and literary critic. He is the author of J.M. Synge: Nature, Politics, Modernism (Oxford University Press, 2021), and was awarded the Rooney Prize for Irish Literature in 2022.

The event has been kindly supported by the Department of Foreign Affairs, Ireland.