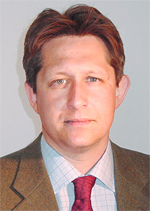 Lecturer in Scottish and English Literature. A graduate of Glasgow University, he was a senior lecturer at Univerzita J.E. Purkyně, Ústí n. L. before taking a post at Charles University. He has published on children’s literature and his research interests centre mostly on Scottish literature. He is also a Proofreader/Editor for various publications and is a Professor of English Composition for MBA courses in Prague. The advancement of the study of Scottish Literature is this lecturer’s primary concern.