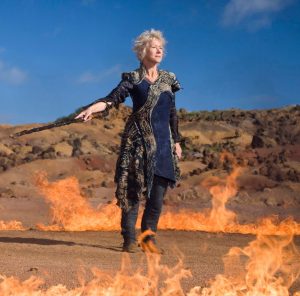 The Department of Anglophone Literatures and Cultures invites you to a lecture “Shakespeare’s ‘badass mothers’ on screen: Aging maternity in Taymor’s Tempest and Fiennes’ Coriolanus” by Dr Edel Semple (UCC), to be held on Tuesday, 3 May 2022, 14:15, in Room 104, main faculty building.

This talk examines the portrayal and significance of aging mothers in the films The Tempest (Julie Taymor, 2010) and Coriolanus (Ralph Fiennes, 2012). In a regendering of Shakespeare’s famous magician, Taymor’s film stars Helen Mirren as the powerful sorceress Prospera, banished from her home for witchcraft and stranded on an island to survive by her wits. In Fiennes’ film, Vanessa Redgrave plays Volumnia as a privileged patrician and army veteran pulling political strings in a Balkan city in turmoil. I argue that Prospera and Volumnia are ‘badass mothers’ and that this character type can offer interventions in recent debates on women in power, working mothers, and female aging on film. As both of these Shakespearean materfamilias characters is played by a senior actress of the stage and screen, my talk will explore casting and celebrity in relation to the two films’ interrogations of contemporary perceptions of maternity and female aging.