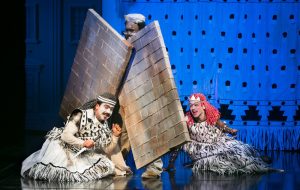 KREAS / Creative Laboratory and Department of Anglophone Literatures and Cultures are pleased to invite you to an international workshop organized in cooperation with the Central European University: “Early Modern Theatre: Creativity and Fiction”.

“Creativity and Performativity in the Early Reformation Period”

Over the past decades, an increasing number of publications described the early reformation period as a “media revolution.” This is mainly due to the sophisticated use of the printing press by the reformers, the dramatic increase of print literature, and the fact that Martin Luther’s writings were the most frequently printed texts of the period. The presentation will show, however, that the technological element in the transformation of the public sphere has been overrated. Other factors are of equal or even greater importance, such as the pamphlet style, the unprecedented fierceness of personal attacks, and the creation of a vernacular language that addresses the theologically illiterate. Moreover, the reformation discourse may also be described as an “egophanic event,” in which the ego takes the center stage. In an unheard-of way, the reformers emphasize their personal role in the eschatological drama. The egophanic character of the early reformation period is manifest not only in the style of publications, but also in the performative acts of the main protagonists.

“‘A Notable Foundation of Hearsay’:

Creative Appropriations of Troy in Chaucer, Chapman and Shakespeare”

An extended and precociously brilliant exercise in ‘parodic intertextuality’ (Rose, 1993), Shakespeare’s Troilus and Cressida (1602) mangles its two main sources, George Chapman’s translation of the Iliad and Chaucer’s courtly romance, Troilus and Criseyde (circa 1385). The play ruthlessly debunks rose-tinted representations of the Trojan war by dramatizing it as beset by gossip, venality and hypocrisy. It not only suggests that the fall of Troy was just the first awful misfortune in the endless series of atrocities that constitute history, but it also undermines the authority of Tudor histories that commonly held Britain was founded by the Trojan Brut. Shakespeare, however, implies that the idea of a unitary British identity stretching back to the noble days of yore – a form of primordialism that has resurfaced in recent years – is built on nothing other than a ‘notable foundation of hearsay’.

“Adaptations of Shakespeare on Indian Screen:

Creative Re-interpretations of Othello and Macbeth ”

In the last two and a half decades, Indian cinema has witnessed several noteworthy adaptations of Shakespeare’s plays. Though there is a history of Shakespeare translations in Indian languages for the last two centuries and numerous stage adaptations and productions, these film adaptations have been noteworthy for their popular appeal, commercial success, and critical acclaim. My paper will attempt a close analysis of two Indian films – Maqbool (Hindi, 2004), a Bollywood adaptation of Macbeth and a regional language film in Malayalam- Kaliyattam (1997)-from the south-western state of Kerala- a localized re-telling of Othello. These two films raise important questions about post-colonial adaptations of Shakespeare on screen, when the film text becomes a creative re-interpretation of the mythos of the plays through use of urban crime underworld of Mumbai (Maqbool) and the use of folk ritual performance of Theyyam from Northern Kerala of Malabar region in Kaliyattam. I argue that these film adaptations re-interpret the Shakespearean universe through re-locating it in a local cultural, political, and social context.